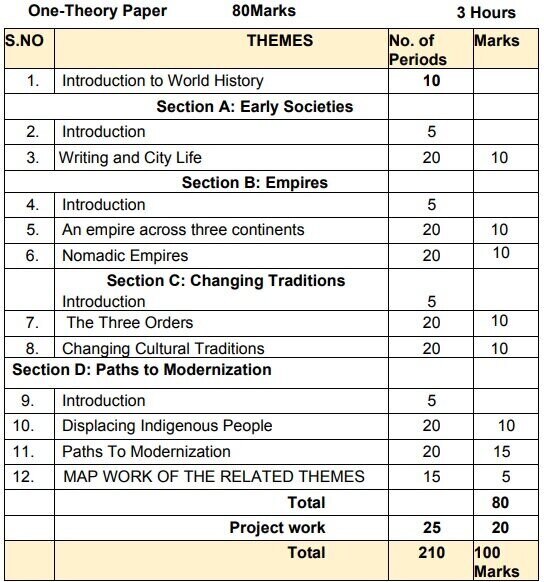 Check CBSE Class 11 Syllabus of All Subjects for 2022-2023 Session (PDF)
CLASS-XI: THEMES IN WORLD HISTORY
THEMES
LEARNING OBJECTIVES
LEARNING OUTCOMES
Writing and City Life
Focus: Iraq, 3rd millennium BCE
a) Growth of towns
b) Nature of early urban societies
c) Historians’ Debate on uses of writing
● Familiarize the learner with the nature of early urban Centre’s.
● Discuss whether writing is significant as a marker of civilization.
At the completion of this unit students will be able to:
● Compare and analyze the transformation from Neolithic to Bronze Age Civilization in order to understand the myriad spheres of human development.
● Elucidate the interwoven social and cultural aspects of civilization in order to understand the connection between city life and culture of contemporary civilizations.
● Analyze the outcomes of a sustained tradition of writing.
An Empire across Three Continents
Focus: Roman Empire, 27 BCE to 600 CE
a) Political evolution
b) Economic Expansion
c) Religion-culture foundation
d) Late Antiquity
e) Historians’ view on the Institution of Slavery
● Familiarize the learner with the history of a major world empire
● Discuss whether slavery was a significant element in the economy.
At the completion of this unit students will be able to:
● Explain and relate the dynamics of the Roman Empire in order to understand their polity, economy, society and culture.
● Analyze the implications of Roman’s contacts with the subcontinent Empires
● Examine the domains of cultural transformation in that period
NOMADIC EMPIRES
Focus: The Mongol, 13th to 14th century
a) The nature of nomadism
b) Formation of empires
c) Conquests and relations with other states
Sd) Historians’ views on nomadic societies and state formation
• Familiarize the learner with the varieties of nomadic society and their institutions.
• Discuss whether state formation is possible in nomadic societies.
At the completion of this unit students will be able to:
• Identify the living patterns of nomadic pastoralist society.
• Trace the rise and growth of Genghis Khan in order to understand him as an oceanic ruler.
• Analyze socio-political and economic changes during the period of the descendants of Genghis Khan.
● Distinguish between the Mongolian people’s perspective and the world’s opinion about Genghis Khan
The Three Orders.
Focus: Western Europe 13th – 16th century a) Feudal society and economy b) Formation of state c) Church and society d) Historians’ views on decline of feudalism
● Familiarize the learner with the nature of the economy and society of this period and the changes within them.
● Show how the debate on the decline of feudalism helps in understanding processes of transition.
At the completion of this unit students will be able to:
● Explain the myriad aspects of feudalism with special reference to first, second, third and fourth order of the society.
● Relate between ancient slavery and serfdom
● Assess the 14th century crisis and rise of the nation states.
Changing Cultural Traditions
Focus: Europe 14th -17th century a) New ideas and new trends in literature and arts b) Relationship with earlier ideas c) The contribution of West Asia d) Historians’ viewpoint on the validity of the notion ‘European Renaissance
● Explore the intellectual trends in the period.
● Familiarize students with the paintings and buildings of the period.
● Introduce the debate around the idea of ‘Renaissance’.
At the completion of this unit students will be able to
● Analyze the causes, events, and effects of the Renaissance, Reformation, Scientific Revolution, and Age of Exploration.
● Relate the different facets of Italian cities to understand the characteristics of Renaissance Humanism and Realism.
● Compare and contrast the condition of women in the Renaissance period.
● Recognize major influences on the architectural, artistic, and literary developments in order to understand the facades of Renaissance.
● Critical analysis of the Roman Catholic Church by Martin Luther and Erasmus and their impact on later reforms.
● Evaluate the Roman Catholic Church’s response to the Protestant Reformation in the forms of the Counter and Catholic Reformations
Displacing Indigenous People
Focus: North America and Australia, 18th to 20th century
a) European colonists in North America and Australia
b) Formation of White Settler societies
c) Displacement and repression of local people
d) Historians’ viewpoint on the impact of European settlement on indigenous population
● Sensitize students to the processes of displacements that accompanied the development of America and Australia.
● Understand the implications of such processes for the displaced populations.
At the completion of this unit students will be able to
● Recount some aspects of the history of the native people of America to understand their condition.
● To analyze the realms of settlement of Europeans in Australia and America.
● Compare and contrast the lives and roles of indigenous people in these continents
Paths to Modernization
Focus: East Asia, late 19th to 20th century
a) Militarization and economic growth in Japan
b) China and the communist alternative
c) Historians’ Debate on the meaning of modernization
(NOTE- Keeping in view the importance of the themes i.e. Japan, China and Korea; it is advised that all must be taught in the schools)
● Make students aware that transformation in the modern world takes many different forms.
● Show how notions like ‘modernization’ need to be critically assessed.
At the completion of this unit students will be able to
● Deduce the histories of China and Japan from the phase of imperialism to modernization
● Explore the Japanese political, cultural and economic system prior to and after the Meiji Restoration.
● Analyze the domains of Japanese nationalism prior and after the Second World War.
● Summarize the nationalist upsurge in China from Dr Sun Yet Sen to Mao Ze Dong to understand the era of communism.
● To analyze the Chinese path to modernization under Deng Xio Ping and Zhou en Lai in order to understand the transformation from rigid communism to liberal socialism.
Map Work on The Related Themes